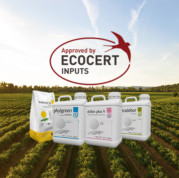 49 Tradecorp products authorised by Ecocert for Organic Agriculture in 2020

The list includes many of Tradecorp’s main products. Some of them, such as Phylgreen and Delfan Plus V, maintain their approved status, while new products, such as IsliFe 8.2, join the list for the first time.

The product portfolio for organic production approved by Ecocert includes many different types of solutions, for example:

In addition, Tradecorp also holds authorisations for Organic Agriculture issued by other organisations, such as the OMRI (NOP) and FIBL certifications: